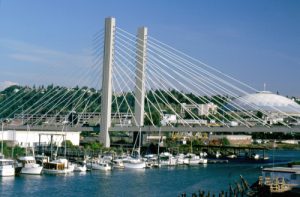 Tacoma was ranked among the top 30 in America’s Most Livable Communities in 2004 (an annual survey conducted by Partners for Livable Communities) Tacoma derives its name from Mount Tacoma, which is known today as Mount Rainier. Tacoma is also known as the “City of Destiny” because the area was chosen to be the site of the western terminus of the Northern Pacific Railroad in the late 1800s. The decision of the railroad was influenced in part because of Tacoma’s neighboring Commencement Bay. By connecting the bay with the railroad Tacoma’s motto became When rails meet sails. Today Commencement Bay serves the Port of Tacoma, a major player in international trade on the Pacific Coast. Tacoma has experienced a remarkable renaissance in the last 15 years, spouting a whole new Museum District, spiffing up downtown with new buildings and businesses, and attracting trendy restaurants, art galleries and shops. All while carefully preserving its maritime heritage and historic structures.

The University of Washington established a branch campus in Tacoma in 1990, as the historic Union Station was being restored. The Museum of Glass opened in downtown Tacoma in 2002, showcasing glass art from the region and around the world. It includes a functional glassblowing studio. Tacoma’s downtown Cultural District is also the site of the Washington State History Museum and the Tacoma Art Museum. America’s Car museum is currently breaking ground in Tacoma (expected opening in 2009). So whether you seek cultural attractions and fine dining or outdoor activity and beach picnics, you can find it all in the city of Tacoma!