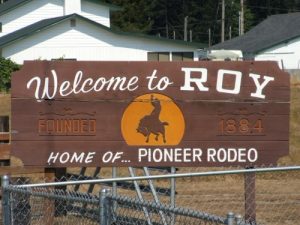 Located 20 miles south of Tacoma, Roy features genuine Old West flavor. It hosts the Roy Rodeo every June and September, complete with bucking broncos, a cowboy breakfast, spaghetti dinner feed, homemade bake sale and evening country dancing. Roy was founded in 1885 and one of the early settlers built the first Murray’s General Store. Destroyed by fire in 1889, the store was rebuilt and expanded to become Nelson Murray Grocery, dry goods, hardware & Feed in 1905. It operated as such until 1992; the building became a restaurant in 1995 while retaining its original look and displaying memorabilia from its general store days.