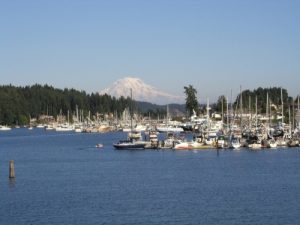 Gig Harbor is the name of both a bay on Puget Sound and a city on its shore in Pierce County, Washington, United States. The population was 7,126 at the 2010 census.

Gig Harbor is one of several cities and towns that claim to be “the gateway to the Olympic Peninsula”. Due to its close access to several state and city parks, and historic waterfront that includes boutiques and fine dining, it has become a popular tourist destination. Gig Harbor is located along State Route 16, about six miles (10 km) from its origin at Interstate 5, over the Tacoma Narrows Bridge. A $1.2 billion project to add a second span to the bridge was completed in 2007. During off-peak traffic times, Tacoma can be reached in five minutes and Seattle in just under an hour.