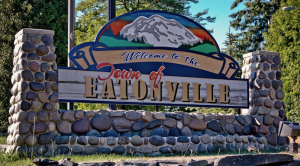 For centuries, Indian people roamed the rivers and streams of the Eatonville area. Indian Henry was one of those who, in 1889, guided the town’s founder, Thomas C. Van Eaton, from Mashell Prairie to the present site of Eatonville. It is said that upon arrival, Henry declared, “This good place. Not much snow.”

Area settlers and Indians were in need of goods, which “T.C.” provided at his trading post. Supplies were carried by his stage from Spanaway over a rough trail through dense forest. In 1891, the settlers built the town’s first school, which is still in use.

Eatonville, Washington was officially incorporated on October 28, 1909. Eatonville is located in southern Pierce County , along State Route 161 and U.S. Highway 7. As per the 2010 census, Eatonville has a population of 2,758 and is approximately 30-35 miles southeast of Tacoma and Lakewood. It is the first stop to scenic recreation areas such as Mount Rainier National Park, Gifford Pinchot and Mount Baker-Snoqualmie National Forests, Northwest Trek, Pioneer Farm, and Pack Forest. Many residents have moved to Eatonville because of the small-town, family atmosphere.