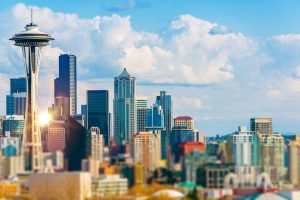 Seattle is a seaport city on the west coast of the United States. It is the seat of King County, Washington. With an estimated 704,352 residents as of 2016, Seattle is the largest city in both the state of Washington and the Pacific Northwest region of North America. In July 2013, it was the fastest-growing major city in the United States and remained in the Top 5 in May 2015 with an annual growth rate of 2.1%. In July 2016, Seattle was again the fastest-growing major U.S. city, with a 3.1% annual growth rate. The city is situated on an isthmus between Puget Sound (an inlet of the Pacific Ocean) and Lake Washington, about 100 miles (160 km) south of the Canada–United States border. A major gateway for trade with Asia, Seattle is the fourth-largest port in North America in terms of container handling as of 2015.

Seattle has a noteworthy musical history. From 1918 to 1951, nearly two dozen jazz nightclubs existed along Jackson Street, from the current Chinatown / International District to the Central District. The jazz scene developed the early careers of Ray Charles, Quincy Jones, Ernestine Anderson, and others. Seattle is also the birthplace of rock musician Jimi Hendrix, origin of the bands Nirvana, Pearl Jam, Soundgarden, Alice in Chains and the alternative rock movement grunge.