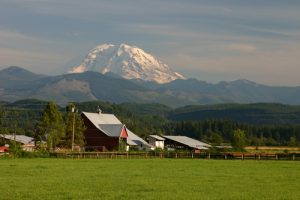 Enumclaw is a city located mainly in King County, Washington; although some parts are within the boundaries of Pierce County. The city of Enumclaw was incorporated on January 27, 1913. Enumclaw has a population of approximately 10,669 and resides on 3.9 square miles, all land. The Enumclaw Plateau, on which the city resides, was formed by a volcanic mudflow from Mount Rainier approximately 5,700 years ago. The city is located in the midst of flat, level farmlands and dairy farms about 40-45 miles east Tacoma and southeast of Seattle neighboring the communities of Buckley and Bonney Lake. Enumclaw is within one hour of any activity imaginable: skiing, hiking, beaches, professional sports, and big city culture.

The name Enumclaw literally means ‘thunder’. Once two brothers, Enumclaw and Kapoonis, were hunting for guardian spirits that would make them great medicine-men. It happened, according to Indian tradition in Washington, that Kapoonis found a fire spirit, and with it he could make lightning. Meanwhile Enumclaw became expert in throwing rocks. So worried was the sky father by this acquisition of power that he translated Enumclaw as the thunder spirit and Kapoonis as the lightning spirit.